Are you at risk of diabetes? Research finds prevention should start at a different BMI for each ethnic group

View commentaries on this research

This is a plain English summary of an original research article

Interventions to prevent diabetes should be triggered at a different body mass index (BMI) for each ethnic group. New research found that some ethnic groups would benefit from prevention at a much lower BMI than is currently used.

Type 2 diabetes is related to body weight, and is much more common in people with obesity. In White populations, that means a BMI of 30. But this figure is not an appropriate guide in other ethnic groups.

Since 2004, the NHS has recommended diabetes prevention for people in some ethnic groups with BMIs of 27.5. However, this was based on limited evidence.

Now, researchers have detailed the BMI values which increase the risk of diabetes in different ethnic groups. For example, South Asian people with a BMI of 24 were found to be at risk of diabetes.

The study used data on more than a million people. It found that people of all ethnicities (other than White) were at risk of diabetes with a BMI lower than 30. In some groups, it was much lower.  For example, the research suggests that people of Bangladeshi heritage could benefit from diabetes prevention even if they have a BMI of 21. 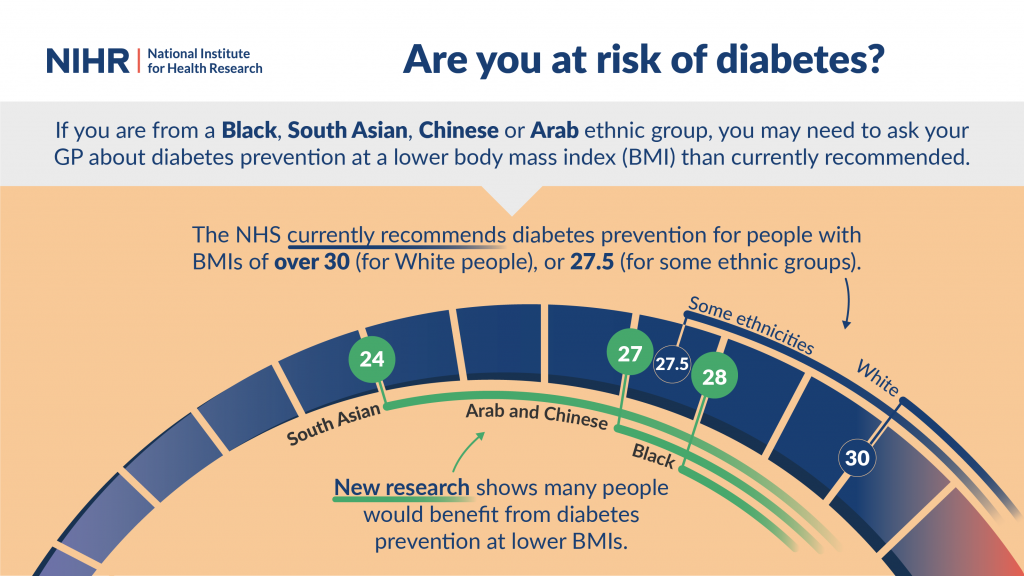 Please click here for a text description of this image

Around 1 in 4 people in the UK live with obesity. This increases their risk of type 2 diabetes, which can lead to kidney failure, loss of vision and other complications. But it is largely preventable through lifestyle changes such as weight management and physical activity. More information on type 2 diabetes is available on the NHS website.

BMI is calculated by dividing someone's height (in metres) by their weight (in kilograms). Obesity is typically defined as a BMI of 30 or more. Doctors tend to trigger actions to prevent type 2 diabetes at this BMI. Actions include advice on diet and physical activity, plus the use of a drug called metformin to improve control of blood sugar.

The definition of obesity (a BMI of 30+) was developed using data mostly from White populations. In 2004, the World Health Organization recommended lowering the BMI cut-off for Chinese and South Asian populations to 27.5. This was because people in these ethnic groups were developing type 2 diabetes at BMIs lower than 30. In response, the NHS issued guidance that a BMI of 27.5 should trigger diabetes prevention in Black, South Asian and Chinese people.

Now, a team of researchers has explored whether diabetes prevention should be started at still lower BMIs for people in some ethnic groups. They looked at a wider range of ethnicities than previous studies.

The team used electronic health records held by GPs and hospitals across England. They used data on almost 1.5 million adults with no previous or current diagnosis of type 2 diabetes. The records included people’s ethnicity and their BMI.

The team measured how often White people with a BMI of 30 were diagnosed with type 2 diabetes. They then calculated the BMI in the other ethnic groups that indicated the same risk of diabetes. They adjusted for age and sex. BMI cut-offs were not affected by smoking or level of deprivation.

The study found that, in these ethnic groups, action to prevent type 2 diabetes is needed for people who have a BMI lower than 30.

Diabetes prevention is needed at or above a BMI of:

A BMI of 24 would be considered healthy in a White population. But South Asian people with a BMI of 24 would benefit from diabetes prevention. This is much lower than the cut-off of 27.5 which is used currently.

The study was large enough for the team to look in more detail at South Asian and Black populations.

They found that, among different South Asian populations, diabetes prevention is needed at or above a BMI of:

(The BMI figures shown here have been rounded).

Why is this important?

This is the first study to specify the BMI levels that indicate a risk of diabetes in different Arab, Black and South Asian populations. Current guidance comes from the National Institute for Health and Care Excellence (NICE) and NHS England. The guidance triggers action to prevent diabetes at higher BMI cut-offs than recommended by this study. This means that people from some ethnic minorities may be currently missing out on advice, tests, or referral to other services. South Asian people in particular could be at risk of developing diabetes at a BMI that is considered healthy in White people.

Triggering action sooner in these populations could prevent people from developing life-long diseases relating to obesity. This would improve their health and quality of life. People with type 2 diabetes require frequent health check-ups which can be resource heavy for both the NHS and the patient.

The reasons behind the study’s findings remain unclear. Genetics relating to body fat composition could play a role (for instance, Asian people typically have a higher percentage of body fat than White people with the same BMI). Lifestyle factors including diet and exercise are likely to be important. Or it could be due to a combination of lifestyle factors and genetics.

The researchers say that, if lifestyle is responsible, the BMI cut-offs could change with time. Future generations might have different lifestyles from their parents, which could affect their risk of obesity. However, if genetics are responsible, these cut-offs will remain lower than for the White population.

The researchers are expecting their finding to be reflected in the NICE guideline ‘Obesity: identification, assessment and management guidance’, when it is updated. To reflect the lower BMI threshold at which ethnic minority groups are in danger of developing type 2 diabetes. These thresholds are likely to be relevant for prevention of other diseases related to obesity, such as heart attacks and strokes.

In June 2021, GP practices were asked to produce a register of all patients living with obesity. The aim is to ensure that this group is offered support for weight loss. These findings suggest that more patients from some ethnic groups should be considered obese - and would benefit from intervention. Obesity registers may need to be updated as a result.

This NIHR Alert is based on: Caleyachetty R, and others. Ethnicity-specific BMI cutoffs for obesity based on type 2 diabetes risk in England: a population-based cohort study. The Lancet Diabetes & Endocrinology 2021;9:419-426

The enhanced service specification asking GP surgeries to record the BMI of registrants.

Funding: This study was funded by the NIHR under its Research for Patient Benefit programme.

Conflicts of Interest: The study authors declare no conflicts of interest.

Disclaimer: NIHR Alerts are not a substitute for professional medical advice. They provide information about research which is funded or supported by the NIHR. Please note that views expressed in NIHR Alerts are those of the author(s) and reviewer(s) and not necessarily those of the NHS, the NIHR or the Department of Health and Social Care.

“We weren’t surprised by our findings. Previous studies have shown that BMI thresholds should be lower for minority ethnic communities. Those studies were limited because of small sample sizes, self-reported disease status, and how they measured type 2 diabetes. They mostly included too few minority ethnic groups.However, we were surprised the work has not been done before. The recommendations about BMI thresholds made some years ago by the NHS and NICE for ethnic minorities were based on limited evidence. Those were small studies that didn’t include people of Indian, Pakistani, Bangladeshi, Black or Arab heritage.The NHS needs to lower the BMI thresholds further for ethnic minorities. This will help ensure these groups are not missing out on opportunities to prevent life-long diseases linked with obesity. I am expecting these results to inform NICE guidelines for standard practice when they are updated.”Rishi Caleyachetty, Junior Doctor, Oxford University Hospitals; Honorary Associate Clinical Professor, Warwick Medical School

“It is vital that everyone with, or at risk of, type 2 diabetes receives the best possible care, and this important research adds to evidence suggesting that setting different BMI cut-offs for obesity according to people’s ethnicity could give more people a better chance of preventing type 2 diabetes or getting diagnosed early.When used appropriately, BMI can provide valuable information that can help people get the personalised care they need. However, it is important that healthcare professionals take a person-centred approach to discussing weight and health, and consider the use of BMI based on individual circumstances.This research suggests that reassessing how BMI is used in the UK to monitor type 2 diabetes risk could help reduce some of the healthcare inequalities that exist.”Esther Walden, Senior Clinical Advisor at Diabetes UK

“As someone living with diabetes, I think this paper will help clinicians to give more focused advice to patients to help them manage their diabetes. The research is relevant to patients from these ethnic groups and to their clinicians in general practice. I wonder if it is worth considering whether GPs should be given financial incentives to focus on this.”Deb Smith, Public Contributor, Leamington Spa

“This is an important area of research which shows the need for revised guidelines for screening populations at risk of diabetes. It is a reminder for us all to think more broadly about opportunistic screening for people with diabetes from different ethnic groups.The analysis is robust. However as with studies like this, there are caveats and limitations which needs to be considered. For instance, there might be unknown factors that were not adjusted for and they could affect the data interpretation. Nonetheless, evidence derived from this study could form a basis for ongoing study and discussion around this research area.”Iskandar Idris, Researcher, University of Nottingham

This website uses cookies to improve your experience while you navigate through the website. Out of these cookies, the cookies that are categorized as necessary are stored on your browser as they are essential for the working of basic functionalities of the website. We also use third-party cookies that help us analyze and understand how you use this website. These cookies will be stored in your browser only with your consent. You also have the option to opt-out of these cookies. But opting out of some of these cookies may have an effect on your browsing experience.
Necessary Always Enabled
Necessary cookies are absolutely essential for the website to function properly. This category only includes cookies that ensures basic functionalities and security features of the website. These cookies do not store any personal information.
Non-necessary
Any cookies that may not be particularly necessary for the website to function and is used specifically to collect user personal data via analytics, ads, other embedded contents are termed as non-necessary cookies. It is mandatory to procure user consent prior to running these cookies on your website.
SAVE & ACCEPT